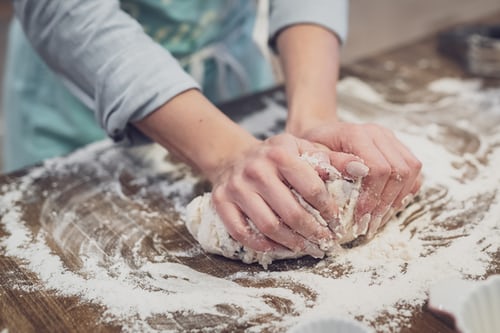 Baking is something that has been taking place for centuries and is still part of so many cultures today. The ovens and microwaves we use now obviously did not exist so baking was much more traditional and difficult. Over time the process of baking changed with the developments of tools and human thinking. Let’s go back to when baking was first done to gain a little insight on how it has changed over the course of 100s of years.

The first evidence to baking was said to be when humans used a combination of wild grass grains soaked them in water and made a paste out of it. It was then made edible by pouring it over a flat hot rock to make a bread life substance. However, with the invention of fire, this process became much easier. Hot embers were used instead of the rock so that the mixture became more like bread.

This solved many problems as food could now be made whenever there was fire.  The origin of baking is still unclear when it comes to who exactly invented it. While there is evidence to show the Egyptians started baking using yeast, in fact Aboriginal people baked before Egyptians started. The context of whether yeast was used or the process of baking leaves the origin still unclear however.

Bread baking using yeast began in Ancient Greece in 600BC. It thereafter extended into the other parts of the region and the world. It was here that the invention of ovens started.Archaeologist have also discovered worktables and ovens that were used, ranging from countries such as Turkey, Rome and even Palestine.

Once baking took off it became a common job in Ancient Rome too while also becoming a prestigious skill and occupation. It was during this time that there were more than 300 chefs in Rome that used to record their recipes and skills, some of which we possibly still follow to this day.

Baking introduced to the world

Due to the Roman Empire conquering many nations, baking to spread across the globe. It entered areas such as Asia and even Europe over time. With the spread of the knowledge and skill regulations came along with it. These were introduced to limit the possibility of false measure. However, as baking grew common new leavening agents were also introduced. Baking soda was invented and is still used even now for breads and cakes.

As time went on ovens improved along with ingredients and skill. Soon the average person was able to bake with ease and convenience. Nowadays baking is simple for us with the availability of any ingredients and equipment.

The recipes written 100 years ago have been tried and tested over time resulting in simple, easy and convenient ways for us to turn out food. The ability to bake is a life skill and even if you are not sure it is your best skill, you can never regret trying.